Excerpt from The Key to the Loch: Homes & Interiors Scotland / April 2015

The O’Connors met up with Ewan Cameron, a Glasgow-based architect who has a long association with the area through having family on the isle of Eigg. “The Lochaber coast is my own heartland,” he says. “When I first drove up here to meet Keith and Mairi, I tried to convey my passion for the area. I felt that I could help them to achieve the house they really wanted – something simple and low-key. Having spent so much time here over the years, they are very much part of the local community, so they wanted the house to be an integral part of it, not some grand gesture.”

Their ideal house, he explains, would have generous living spaces that maximise the extraordi nary views over Loch Ailort to the north, the peak of Rois Bheinn to the east, and the fabulous sea views and sunsets to the west with the un mistakable silhouettes of Eigg and Rum. “The island views – that’s where I thought I’d want to be having my dram, or my glass of wine or cup of coffee,” he says. “That’s the place you’d want to sit down at the end of the day. So I just worked back wards from there.”

His design, a single-storey L-shaped home that nestles into the hillside, was inspired by his Kyoto-influenced design philosophy. This sees architecture as a frame from which to contemplate nature – an approach he experienced while practising in Asia prior to setting up his own company on his return to Scotland in 2009. “The beauty of the Atlantic view contrasts with the intimate sheltered space of the courtyard, while the modest form and palette of materials ensures that the building makes a quiet impact on the natural surroundings of rock and heather,” he says.

“The house has its basis in a pavilion-like L-shaped house that I previously designed in Perth shire. That house faced into a private courtyard, but in this one the living wing (in one leg of the L) and the sleeping wing(in the other) instead look out to the landscape – it’s taking the idea of the original courtyard building and reversing it,” he explains. “This also meant that we could explore the Japanese ‘hide and reveal’ idea. When you arrive at the house at the top of the hill you don’t really see anything, just the courtyard – it’s tantalising. Then you open the entrance door and spectacular ocean views appear in front of you.”

The single-storey arrangement also pleased the local planning department, as the architect explains. “The planners asked us to keep the height of the building as low as possible – they didn’t want it to be too visible from the road. As a result it’s a single storey and the slate roof has the shallowest pitch possible – just 20°. This low-slung design also meant that we could build on the outer edges of the plateau, as we wanted to pull the house away from the shadowy northern slope to allow sun into the courtyard space. 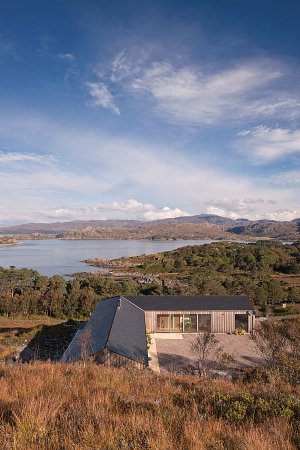 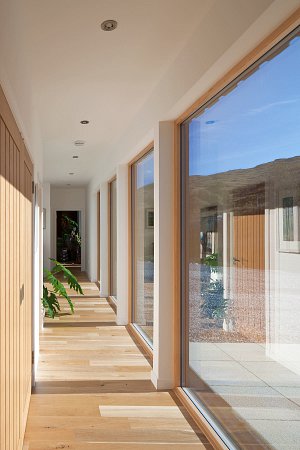